A casual conversation at work a few days ago brought up an interesting realisation – people will go far and wide to see the world, but often neglect to see their own city. Now I am not originally from Delhi, but having lived in Delhi/Gurgaon for over 15 years now, I guess I can qualify as a resident. I was quite surprised that my Delhi-ite colleagues had never been to places like Qutub Minar and Red Fort. After a quick mental inventory I realised that though I might have seen these two, there are still a number of places in Delhi that I have not explored yet. Over the next few months, I will be trying to remedy that, and also hoping to encourage others living here to explore their surroundings. This post on Qutub Minar is therefore the first of my “Exploring Delhi” series.

I first visited Qutub Minar as a young trainee in a travel agency, escorting a group of school children on a sightseeing tour of the city. Even though I didn’t get a chance to spend much time there, I remember wondering at the expanse of the site and promising myself I’d return. I returned one February afternoon, camera in tow, and ended up spending hours just wandering around the entire complex.  It was beautiful.

Some historical background now, for those who are not familiar with Delhi’s history.  Delhi is said to have been built not once but seven times, at different periods in history. One of these seven cities was Mehrauli (now an area in south Delhi), capital of the Slave Dynasty. The first king of this Sultanate, Qutb ud din Aibak, started the construction of the Qutub Minar in 1199 AD. His successor Iltutmish finished the job some 25 odd years later. At 73m high, this was the tallest brick minaret in India. Depending on which theory you believe, the Minar was either a victory tower or a place for the muezzin to send out his call for prayers. 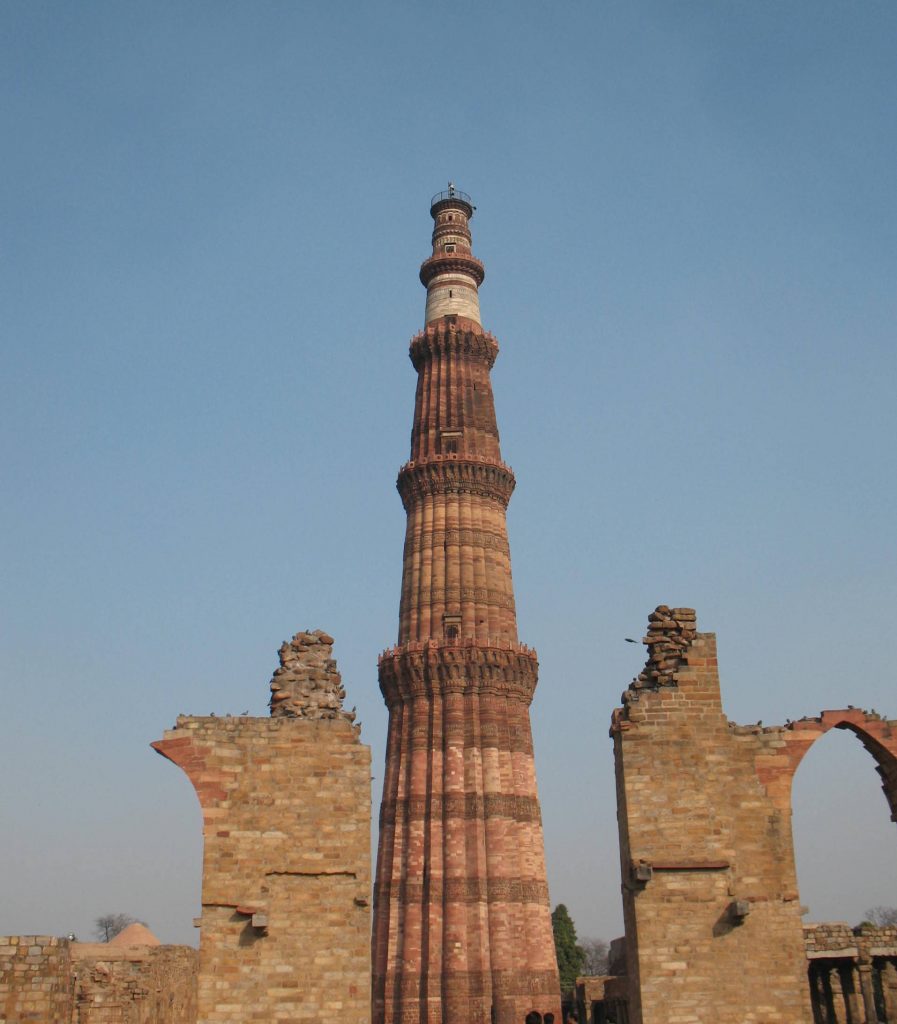 Today, the Qutub Minar complex is a UNESCO World Heritage Site. Later rulers (including the British) added to it, making the complex quite a mix of influences. The original sandstone tower suffered damage on multiple occasions due to earthquakes and lightning strikes; in fact the two upper stories are later additions. Apart from the Qutub Minar, the complex also has the Quwwat ul Islam mosque (said to be the first mosque to be constructed in India), various tombs and arches, and the famous Iron Pillar.

The Iron Pillar of the Qutub Minar complex was originally constructed in the 4th century by Chandragupta, one of the most famous kings of ancient India and the founder of the Gupta empire. Constructed of an iron-alloy mix, it’s highlight is that it has resisted corrosion for these thousands of years. A later king brought the pillar from Central India to Delhi, and it now stands near the Qutub Minar in an unusual juxtaposition.

You don’t need to hire a guide to visit the Qutub complex. Just pick up an audio guide from the ticket office and you’re set. You can wander around at your own pace and choose how much – or little – you want to know. The complex is open from sunrise to sunset, except on National holidays. If I were you I’d go in the morning or late in the afternoon, since that’s when the light is best for photography.

If you are ever in Delhi with a couple of hours to spare and have even a little interest in history, I would recommend a visit to this medieval remnant of the city’s past.

Getting there – if you are in South/Central Delhi or in Gurgaon, the Yellow Line of the Delhi Metro will take you to Qutub Minar. Alternatively you can take an Uber/Ola cab, or get someone to drive you over.

This site uses Akismet to reduce spam. Learn how your comment data is processed.